Jurassic World has come and gone, and left a huge mark on the film industry becoming the third highest grossing movie of all time (domestic and worldwide). Critically it was panned, I was more lenient with its shortcomings because that T-Rex & Raptor tag team fight at the end was totally rad. So, because of this resurgence in popularity of all things dino-related, I decided to read the original novel. I was told that it had enough differences from the movie that makes it worth the read. I dove in, and it was great. My colleague Tom Lorenzo has been writing a great series comparing James Bond books and movies (which you can check out here) and it inspired me to try it out with Jurassic Park.  Plot-wise there aren’t many differences, both get to the same conclusion, many of the differences stem from the characters. Spielberg combined characters, swapped ages, changed appearances, and completely changed the personality of a very important one. I’ll be comparing and contrasting the two within three categories, plot, characters, and legacy. Spoilers for the movie and book will follow.

Michael Crichton does an amazing job of making complex scientific ideas and theories very easy to follow and understand, and that’s the book’s strong point. In the first few chapters it almost reads like an investigative report. A few characters trying to figure out why infants are being eaten in their cribs by small lizards, which Spielberg strayed far away from. Crichton likes to go into detail of the dinosaurs attacks, guts getting ripped out, limbs being torn off, etc. There’s a scene in the novel involving a little girl on the beach that’s essentially the same as the prologue of The Lost World. Spielberg likely left it out of the first movie so he could build suspense for the dinosaurs to show up later on, a technique that worked pretty well for him in Jaws. The Raptor cage scene in the very beginning is very reminiscent of the initial Shark attack scene in Jaws now that I think about it.

Crichton delves into a little corporate espionage as well, fleshing out the company Nedry steals the dinosaur embryos for. The picture each medium paints of the park itself is a little different as well. It might be the way I read it but Crichton describes the park as under construction but dilapidated, there’s a very eerie feeling when you read the way he describes it. As if it’s already been abandoned and left to the dinosaurs. Spielberg paints the park almost like Disneyland under construction. Things are still being built, but theres a glimmer and shine to it that makes its appear less threatening.

The film and novel both hit the same main story beats, the tour, Nedry turning off the power, the T-Rex attacking, Grant and the kids getting back, the Raptors attacking, and then the escape. There’s some extra stuff Crichton sprinkled in to flesh out the story a bit and to build the tension. There’s a whole river chase involving Grant and the T-Rex that was partially shot but omitted from the movie for budget reasons. The T-Rex is much more a pain in the ass in the novel for Grant and the kids, he’s on the hunt for them, where as in the movie he’s just kinda eating whatever’s close by. The river scene starts off hilariously with the T-Rex sleeping and sitting down. It’s very hard for me to picture the T-Rex Spielberg had created for the movie sitting down and sleeping without it having a bubble coming out of its mouth like the Piranha plants in Super Mario 64.  The T-Rex wakes up eventually and swims after Grant and the kids down the river. Not very important to the plot but a pretty cool set piece nonetheless.

The endings of each are pretty different. For one in the novel almost everyone dies, with the exception of Grant, the kids, Ellie, and Gennaro. Malcolm is said to have died, however he is the main character in The Lost World, and Crichton hastily retconned his death. The ending of the novel flows a little bit better as well, providing answers to questions that arise from the film. For example the Costa Rican Army shows up at the end of the novel and fuckin’ destroys everything. In the movie they just kinda let the dinos run free and do they thang. I can see why Spielberg opted out of the fiery dino-death ending, after all you gotta sell some toys right? The novel goes a little further and details that Grant, Ellie, and Gennaro are not allowed to leave Costa Rica until the investigation of this dino clusterfuck is complete. I prefer Spielberg’s ending myself, the fact that they are stuck in Costa Rica doesn’t really add much to the story. Sure it’s very likely that it’s what would happen realistically, but who wants realism in their Dinosaur stories?

Here’s where the differences stack up high. For one we’ll start with Grant. Overall he’s not too different from Sam Neill’s portrayal, he’s brave and he’s an outdoorsman survivalist. Appearance wise, Crichton describes him as having a beard. While reading it was tough for me not to picture Sam Neill, so instead I just imagined Joel from The Last Of Us. Seemed to fit in alright despite there not being plant-zombies all over the place. 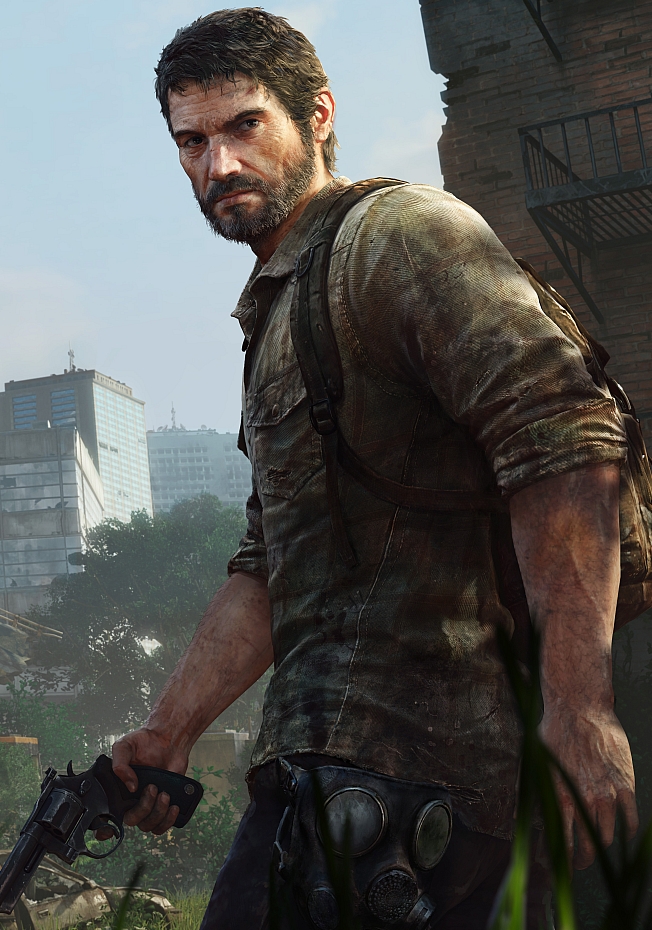 If The Last of Us 2 doesn’t feature Plant-Zombie-Dinosaurs I’ll be severely disappointed.

Grant and Ellie’s relationship differs between the two as well. In the movie they are romantically involved, in the novel they are just close friends who work together. I give Spielberg credit for trying to add some emotional heft to the story, because the novel has a problem of other characters kinda not giving a shit about other characters. By making Ellie and Grant a couple you believe she wants him back, whereas in the novel it almost seems she wants him to get back safe because it’s what she should be feeling. Ellie is somewhat one dimensional in the novel, she gets delegated to taking care of Malcolm while he’s injured. In the movie she is combined with Gennaro’s character in the novel. Going out on on various errands with Muldoon and such. Another change Spielberg made that I like, because it makes her more interesting, and plays more into the idea that her and Grant are in a relationship, because they’re both courageous adventurers.

Gennaro is a interesting point of discussion. The only thing Gennaro from the novel and Gennaro from the movie have in common is that they’re both lawyers. Movie Gennaro takes more traits from a book character named Ed Regis, a public relations manager for the park. Regis is cowardly and shady and is the first major death in the novel and the movie.  Gennaro in the novel is much more present, essentially doing everything Ellie did in the movie. Once again Spielberg made a smart move by combining Gennaro into two characters, it would’ve made the film feel overcrowded if Gennaro was in there as a separate character.

In terms of the children, Spielberg did an age swap, making Lex older and making Tim younger despite not changing their personalities. Tim is still a fan of Grant in the novel but more capable of actually helping because he’s older. Lex is as useless in the novel as she is in the movie. The strange thing is that Spielberg didn’t even attempt to change Lex’s personality, in the novel she’s 6 years old, so its understandable that she would be whiny and irritating. But she’s exactly the same in the movie! Seriously, she carries on like she’s 6 throughout, screaming and stuttering. Sorry, she really just annoys the hell out of me in the movie. Almost as much as Willie in Temple of Doom. In the novel Tim gets the computers back online, which Spielberg gave to Lex, likely because he realized how absolutely pointless she was.

Malcolm is featured pretty heavily in the novel or rather his philosophical rants, which I enjoyed throughly. Goldblum does a great job of bringing him to life, and who doesn’t love that laugh? In case you forgot what I’m talking about, here it is repeated for 10 minutes.

Hammond is completely different in the novel. For one thing, his whole jovial, eccentric old man card is a facade, and he’s a legitimately unlikable person. He’s a business man first, giving the excuse that he wants to see the look of wonder on kid’s faces when he really cares about the safety of his costly investments. In the movie the jovial eccentric old man card is legitimate. He actually cares about the park and wants people to feel the majesty of the animals. Hammond is a legit bastard in the novel. For one while his grandkids are lost on the island with Grant he barely seems worried about it, he’s more preoccupied with the park getting back to normal. Also spoilers ahead if you want to read the book. In the novel Hammond is killed by a pack of compys, ironically by his grandkids messing around on the intercom by playing a fake T-Rex roar. Hammond gets startled and falls down a hill breaking his leg, which attracts the compys. I like the idea of Hammond getting murdered by his own creations that he cared so much about it. However, I think Spielberg made the right choice by removing his dark side, movie Hammond’s fate is harsher than the other’s. He actually believed in the park and wanted it to succeed, but eventually realized that Malcolm was right and that the animals could not be tamed. End Spoilers.

What has stood the test of time? The book or the movie? In the case of Jurassic Park this is a pretty open and shut case. 100 years from now, everyone will remember the movie. That’s not to say that the book isn’t great, it might even be better than the movie in some respects, but Spielberg made the quintessential dinosaur movie. Before Jurassic Park it was King Kong.  It took Hollywood 60 years to make another movie with dinosaurs in it that had as big of an impact. Now no one will be able to make a movie with dinosaurs in it without comparing it to Jurassic Park.Not to mention its still a great movie, and it still looks great. At some points the early 90’s CGI looks a little crappy especially in daylight scenes, but the T-Rex coming out from the cage still looks absolutely fantastic.

This movie will stand the test of time. The book is a great companion piece to the movie, fleshing out characters, getting into the science and the behavior of the animals moreso than the movie. The book is different enough from the movie that you will want to keep reading despite knowing the main plot points. As a kid and an adult I still love the movie, but reading the book helped me appreciate it more. It’s a excellent read and Crichton does a great job of making complex scientific and philosophical ideas easy to understand. If you’re a fan of the movie, I highly recommend reading the book. And if you’ve never seen the movie, why the hell are you reading this?