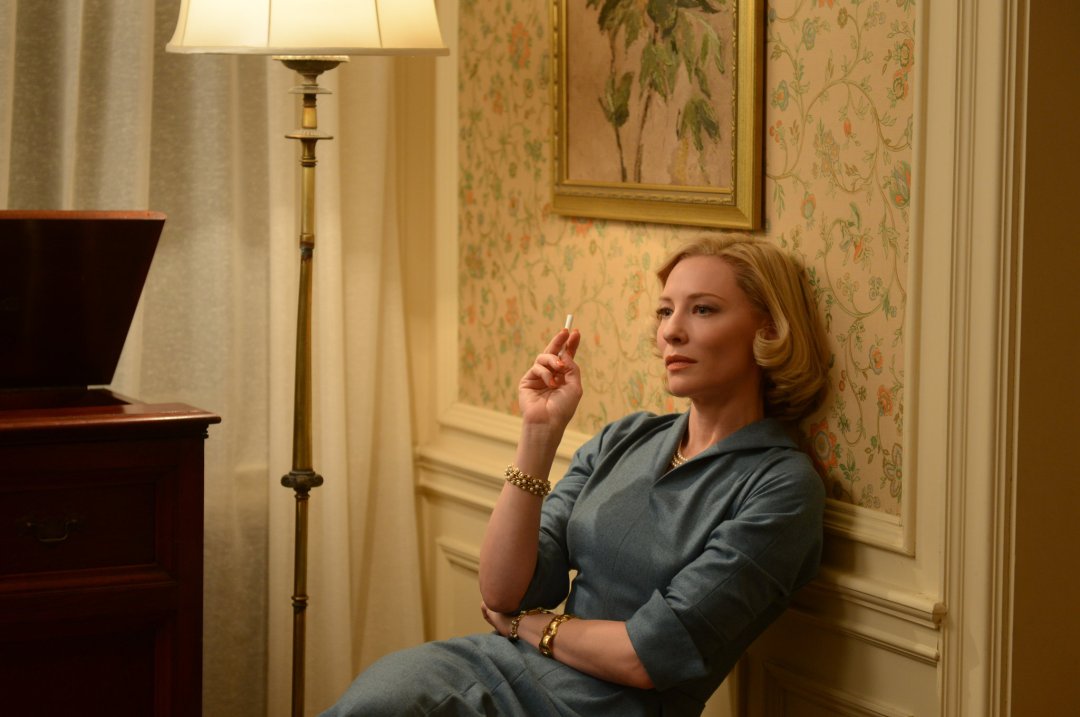 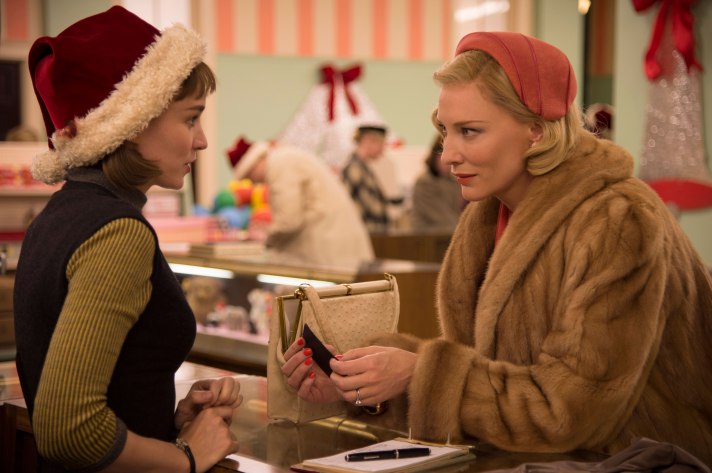 There’s an easy way to make this movie highly sexual and exploitative and commercial.  Two women falling in love in the 1950s, a forbidden love that can’t be flaunted in any way sounds like something I’m so surprised Paul Veerhoven didn’t make a movie like this in the 90s with Sharon Stone.  But this is from Todd Haynes, and that sort of business isn’t his game.  His got more tact/a desire to get to the heart of human interaction.  So being set in a time where this sort of love can’t be open, this is a very quiet and subtle movie to reflect the relationship at the heart of it.  It’s a movie with pregnant, knowing silences and longing glances.  A movie of quiet heartbreak and quiet victories.  Nothing is too big here.  That can be a problem for some.  Too slow or too drawn out.  I can cotton to that feeling for some.  But it’s all handled with grace and a precision that only comes from a talented captain at the helm, and Haynes is that captain.  He coaxes two fantastic performances out of his leading ladies, two women from very different social strata that convey the internal yearning for a significant other.  These ladies are fantastic and it’s a nice rebound for Mara after the embarrassment that was Pan.  Blanchett does this shit in her sleep but it’s nice to see that she isn’t slipping as her fantastic career keeps on going strong.  Another fantastic performer here, one that is getting lost in the love fest for Blanchett and Mara, is Kyle Chandler. His man is the kind of man who doesn’t really understand what homosexuality is.  Blanchett left him and he just misses his wife.  But his mind just can’t grasp it.  Which makes him dangerous.  Yet again though, this isn’t the movie where he grabs a gun and makes a big scene.  Subtlety and humanity is key and they refuse to make him a mustache twirling villain.  Just a lost, sad man who has the unfortunate ideals of the time in his head.  And Chandler nails this supporting role.  This was a very good movie that hit all the notes it needed to.  My heart wasn’t completely taken by it but I feel like it may well grow over time.  At the very least, it won’t decrease in stature in my mind. 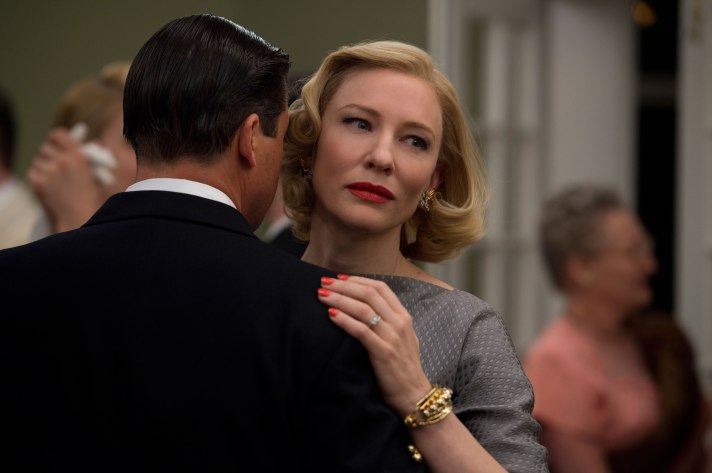 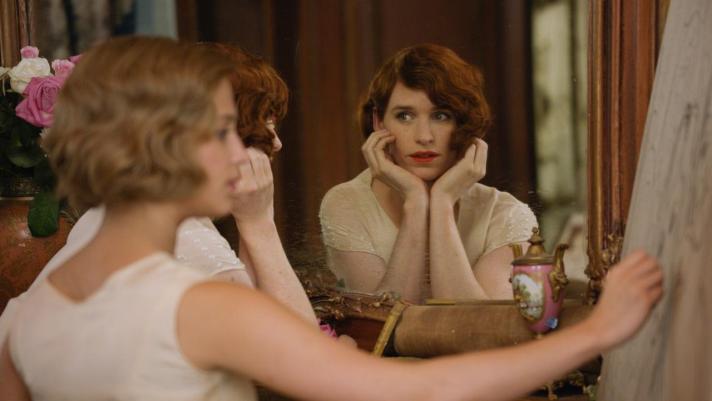 There is no worthwhile story that Tom Hooper can get his hands on that won’t be stifled by his lax directorial style.  His movies have had no pulse, sinking the ships before they can even leave the port.  Les Miserables is one of the best stories of all time and his horrible shooting style and weak storytelling abilities killed it, making it one of the worst movie going experiences of my life.  His next project would be this one, a movie about a transgender icon in the 1920s with Eddie Redmayne playing the main role.  Suffice it to say, dread shot up and down my spine.  An actor who I have not much use for deciding to play dress up for a director who ruins projects he takes on that have such an air of undeserved self importance.  Because like Les Mis, this has a story that can be good at the center of the movie.  He failed yet again, but not at such a massive level as Les Mis.  This one just sorta coasts by at a slow and boring pace, anchored by a great performance by Vikander.  She feels like a real person, unlike Redmayne who is way too mannered.  Redmayne, without someone to imitate like he did in The Theory of Everything, comes out with a performance that feels like his idea of what a trans person would be like without actually having met one or studied up to get the character down.  Its just tics.  Blinking fast and having his little forced smile try to do his work.  Never believed him one second.  Hooper brings his typical unremarkable visual style that he wants to pass off as dynamic, making everything really bland.  His camera shots are wonky too and his editing is kinda off.  Gives the movie a weird flow.  I can’t even muster up anything really deep to say about this.  I didn’t hate it and it’s not some absolute piece of trash. Just middling, desperate Oscar bait that just fails the important story at the heart of it.  And it ends on such a weird note of making the whole journey feel like it’s Vikanders story and not Redmaynes.  Bizarre and just misjudged storytelling. 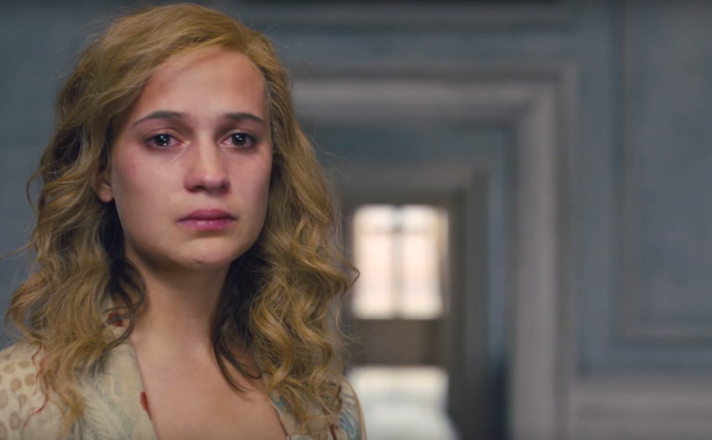 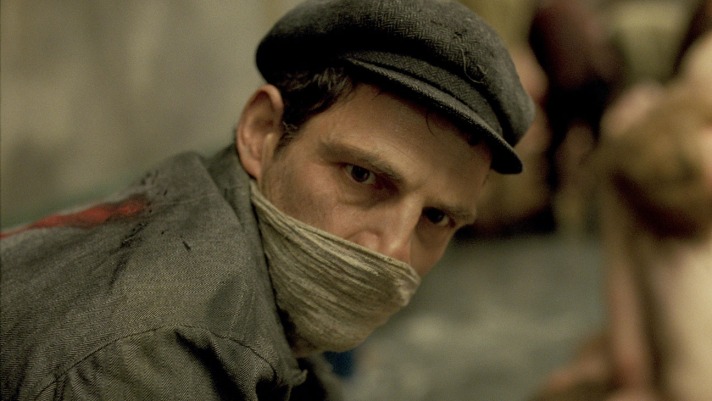 Sometime’s a cool visual idea doesn’t really work in a feature length setting.  This movie has the interesting concept of shooting everything in medium shots of the protagonist, Saul (Rohig).  You very rarely cut away from him, so you get the world around him basically in snippets.  In this flick that is a WWII concentration camp, so it’s horrors we’re glimpsing. The edge of the frame is bustling with life and this is too put us in his shoes, seeing only what he can see.  Which is kinda not done right then, since there’s shots from the front so we’re seeing things behind him which obviously he can’t see.  That’s a little nitpicky, but kinda goes to the issue at hand.  You can’t really get the true horrors at hand they want us to feel by not really seeing the horrors.  In a post Schindler’s List world (not to mention documentaries like Shoah), you can’t hide the travesties at hand.  It’s not like we haven’t seen this before and hiding it from full view is too keep us at a distance from it.  If you wanna put us in his shoes, he’s seeing this stuff closer than humanly possible.  Saul cleans up the gas chambers and puts bodies in the ovens.  He isn’t waiting for death in a camp like most movies make it seem.  He’s in the shit.  The only scene that really pulls no punches with the brutality is a scene where he stumbles upon a mass execution in a mass grave since the ovens are too packed.  Doesn’t hold back and it’s truly affecting.  But the biggest problem with this filming style is that it can be really grating to watch.  By sticking to this style, there’s a good deal of moments where the medium shot doesn’t work.  For the first time I really got the complaints about shaky cam, cause this hurt my eyes.  Which is a shame because this is a story that could have been fantastic.  Saul has done a lot of really bad stuff to survive a bit longer in this hell.  When he sees a boy’s body in the gas chamber, something snaps in him and he has to give this boy a proper Jewish burial.  So we follow him trying to do one good thing in a hell made up of acts of desperate survival.  Which kinda goes back to the camera style, since they spend way too much time trying to be immersive.  More immersive than actually necessary, filled with lots of walking and procedure.  Takes up way too much time and starts to dilute the powerful story.  That and the ending doesn’t really work for the theme it’s trying to portray.  It’s supposed to be that it’s better to die doing something good than surviving doing something bad, but this is a concentration camp story.  It’s totally ok being a bit bad to survive a hell previously unknown on this Earth.  And it ends with Sauls bullshit getting a lot of people killed.  There’s some great moments in this movie but it just doesn’t stick the landing.  I wish it did, but alas.  One more Holocaust movie that is kind of unnecessary in this day and age. 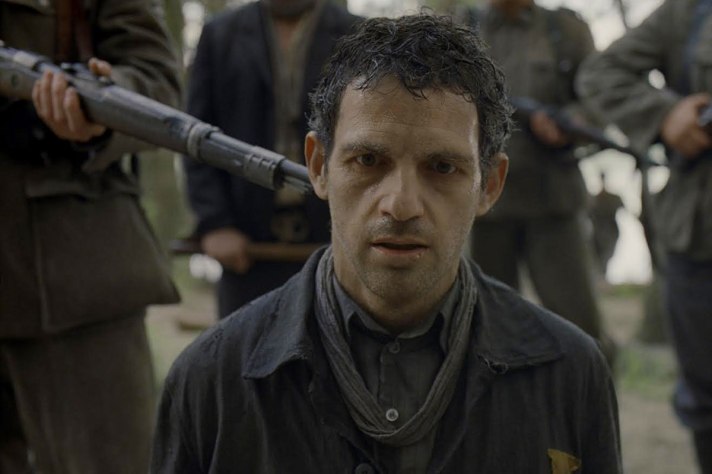