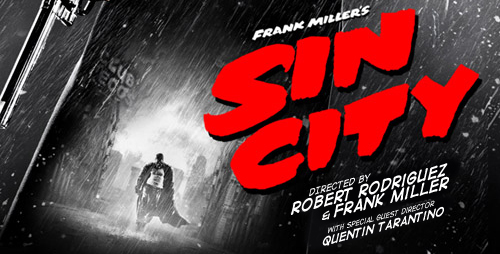 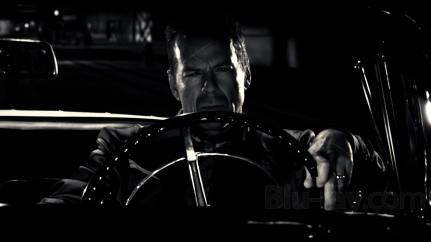 ’ve seen this movie before.  This isn’t a fresh take opinion on it or a rewatch to see if my feelings have changed over time.  I knew what I felt and it hasn’t really wavered.  But it’s the first time I’ve watched it in full since seeing the absolute abortion that is the sequel, Sin City: A Dame To Kill For. Frank Miller has been putting out a new Batman comic that is the best thing he’s been involved in in over a decade, so it put me in a mood to read the biggest thing he’s done that I didn’t read yet.  And that’s the Sin City series.  And having gotten into that and really enjoying it so much, I needed to jump back into the original movie.  A movie that blew my mind as a 14 year old kid with no knowledge of it’s comic roots.  Having the comics in my mind hasn’t exactly changed my opinion of the quality of the movie, but it’s given me a significant appreciation for the faithfulness of it.  It also made me really angrier at the sequel, because it’s pretty faithful as well but somehow such a failure.  Why is that? That’s what’s been running through my mind since rewatching this movie.  I think the biggest problem is tone.

That original movie was a very unique movie at the time.  Nothing like it was around before, with such stunning and purposefully fake visuals to heighten the comic book sensibilities.  It was a breathe of fresh air and made the movie stand out.  Robert Rodriguez was also still a viable talent, a director of some worth for good entertainment.  He hadn’t devolved into self parody yet, the failure of Grindhouse not weighing on him. So his ability to juggle tones was not yet completely gone.  This series has a sense of black humor, but is also deadly serious.  It’s gotta be playful but never losing sight of the weight of the situation the characters are in.  So it’s a big, overblown movie that goes pretty crazy but also has some truly heinous stuff go down.  So there’s a weight to it that never becomes overwhelming. You can have fun with the movie.  Because for all the stuff of rape and murder and pedophilia and cannibalism running through the movie, you have Clive Owen almost drowning Benecio Del Toro in his own piss or Bruce Willis ripping a yellow mutants nuts off with his bare hands.  It also helps that Frank Miller wasn’t given too much control over the movie, being more a helper to Rodriguez than a full on partner.  There’s (almost) no original material in here for now talentless Miller to make us suffer through.  It’s three great stories that he wrote in a viable creative time in his life, before the misogynistic mania drove him insane.  So it was a confluence of great talent in Rodriguez being able to rein in Millers sensibilities to tell heightened noir tales with a fantastically unique visual style.  And almost all of that would be gone with the sequel.

Sin City: A Dame To Kill For was a movie anticipated with bated breath almost immediately after the originals release.  Talk of a sequel went on for years.  And years.  And fucking years.  How a movie made the way Sin City was (in chunks over time) couldn’t be made in less than 9 years is fucking astonishing.  That could be due to Rodriguez making 100 god damn movies that took him away from the sequel he kept promising, and the commercial drubbing he took with Grindhouse really affected him in a way that didn’t affect Quentin.  I really believe that failure to connect really hit him hard, as you can see his movies afterwards have had a distinct sense of parody to them, without the apparent self awareness to be intentional.  So over the top and silly and campy.  It’s like he’s lost the touch to balance the tone and he can’t keep the stories serious while having fun.  There’s no weight at all to what’s going on, and that is easily apparent in Sin City 2.  What is different between the two is the level of effort put into it, and the tone suffers for it.  Rodriguez’ propensity for making movies cheap and quickly killed this movie.  No one is interesting and is played with cardboard cutout intensity/depth.  Even Mickey Rourke, who killed it in the first one, feels like he forget how to play Marv.  The visuals are somehow worse looking than the 9 year old movie that proceeded it, which is bizarre since computers have only gotten better in the 9 years.  They even made a story with Eva Green being nude for a while boring. And while it would be easy to pin the blame on Rodriguez, he isn’t the only one at fault here.

Frank Miller is one of the most important figures in comic history, and he has a dearth of great titles to his name.  This series here, his run on Daredevil, creating Elektra and those books he did with her, and changing the industry with The Dark Knight Returns and Batman: Year One.  But for as high as he hit in the 80s/90s, he fell just as low post 2001.  He killed his own legacy with an abortion of a sequel to TDKR, a comically bad Robin origin story, and obnoxiously offensive story about a knockoff Batman fighting the taliban.  All this is a lengthy preamble to say Miller has become a garbage writer in his old age, filled with all the fascistic opinions he once skewered in his hey day and a deep anger at anyone not a privileged white man.  Like Rodriguez, he became a parody of himself.  Yet for some reason, with a great deal of material to work with already written in the 90s, the bright idea for Miller to write two new stories for this sequel was brought up and then executed.  Even if Rodriguez didn’t lose some talent in the intervening years, having material written by modern Miller was too much of a losing battle.  There was almost no chance this would work out well. 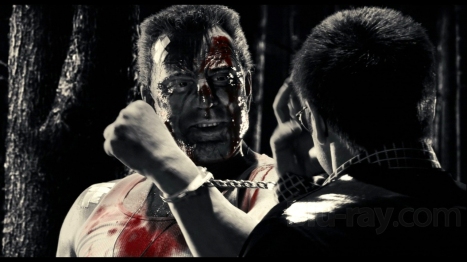 9 years people waited for a sequel to Sin City, it’s anthological nature making it easier to make another.  Yet too much time had passed and alot had happened to the creative forces on the film.  Rodriguez lost his talent, Miller continued to lose his mind and was given way too much creative control this time out.  New material that focused on uninteresting characters or completely misunderstood returning characters (Marv and Nancy). Rodriguez’ new insistence on cheap and quick filmmaking in his backyard just compounded in all into an ugly stew.   It stings a good deal since I have a great deal of love for the movie, seeing it as a 14 year old kid and having my mind blown.  Add on the years of growing up and gaining interests that would make the series even more up my alley and finally reading the books, and this was a big bust for me that has only gotten more painful over time.

One thought on “Sin City: The Cinematic Comparisons”