This has been a very odd year, wherein the vast majority of sequels being released are not performing very well.  It hasn’t helped that the movies being released aren’t very good, but that hasn’t stopped the knuckle dragging masses from seeing the newest slogventure of Jack Sparrow or a Bayformers movie.  Batman v Superman, X-Men: Apocalypse and Zoolander 2 are among the leagues of movies that have underperformed and shown how misguided the makers were in thinking audiences would flock to their movie.  Civil War seems to be the lone standout this year, as it has smashed records with it’s release.  Now, of all the movies that have underperformed, Zoolander 2 is very relevant this weekend.  That was a movie that didn’t even perform that well at the time, but quickly amassed an (unwarranted, IMO) cult following.  It was a movie of it’s time, and it would have been much better staying there instead of being tainted by the ever declining Ben Stiller brand.  There was a time where a sequel would have been relevant and timely.  But 15 years later is way too late for that.  The zeitgeist has passed.  Which is why it’s bizarre that we are in the opening weekend of a 20 year delayed sequel to Independence Day.   2015 may have been a year that showed delayed sequels don’t have to be bad, but 2016 is showing us that that was a flash in the pan.  And this newest sequel helps to prove that.

Set 20 years after the events of Independence Day, the world has united and life is pretty great.  They’ve harnessed alien tech to strengthen their security, and are all but passing the time waiting for wait they believe is an inevitable return.  And lo and behold, on that 20 year anniversary the aliens return and shit gets real.  Now, that in and of itself is really not a bad idea.   It’s actually pretty good for a starting off point.  But what we find out as the movie progresses, the execution of these ideas is really not up to snuff.

Roland Emmerich is one of the worst directors working in the business.  At least in the range of guys getting budgets in the 9 figures to make a movie, he is the most uninteresting.  There are moments in his movies where he almost comes close to being interesting, but then executes these bizarre ideas in such bland ways that you don’t really get excited about it in even ironic ways.  Say what you will about Michael Bay and his work on Transformers in particular, but those movies are so singularly weird and filled with a cynically toxic personality that they are fascinating trainwrecks.  But this is surprisingly bland and rote.  This is a movie where a ship roughly 5/8ths the size of the Earth lands on it, ripping Asia up and dropping it on Europe.  But it’s so lacking in visual panache or character reactions to it that you kinda don’t even realize how crazy it is.  Roughly 1/4 of the Earth got demolished in an instant, and you’d think it was just no big deal.  Or that a vortex is seemingly destroying the Moon, they don’t react as such.  It’s almost like the characters themselves realize how repetitive and cynically money grubbing the entire affair is.

Emmerich is so incompetent that it makes me mad at how he fumbles some good ideas.  The premise of the aliens returning, the Earth being united with no more war, being dropped into an Intergalactic war that’s lasted Millenia, the old guard being pushed aside for the new generation.  There’s good stuff, but it’s just blown through in such a massively rushed narrative that nothing is given it’s proper due.  The movie is set in roughly a 12 hour span, if I’m remembering correctly, and so much happens without a hint of drama or stakes to it all.  Things just happen because they have to.  There’s a ticking clock at the end of the movie, and 4 minutes takes approximately 20 minutes of screentime.   It’s just so frustrating to see decent ideas fumbled so badly.  There’s alot of retconning of things that supposedly happened in the battle of 96 that would be more interesting if it so blatantly was shit added to prop up this limp movie.  Like a ship that landed during the attack that was drilling to the Earths core at the time and the Aliens in it breaking free and waging war in Africa.  This stuff again could have been good if Emmerich was a decent director in any sense, instead of relying on his effects team doing the hard work for him.

And as per usual in his career, Emmerich just completely mishandles the cast.  No one does good work here.  The returning actors don’t even feel like the same characters.  Pullman is just bland crazy man, Goldblum is doing an ironic performance to be made specifically for memes, and Vivica A Fox has 1 minute of screen time and dies.  The new cast is bland as hell, unable to elevate the crap material they get.  Maika Monroe is a good actress but is stranded with a nothing role.  Liam Hemsworth keeps proving he is the off brand supermarket Soda to Chris’ Coca Cola.  Jessie T. Usher is just bland pilot man.  He’s a good guy and that’s about it.  And the most irritating thing in here is the boneheaded return of Brent Spiner, who just chews up as much scenery in as irritating a manner as I’ve seen in a long time.  Not a single person looks good by the end of the movie, and it’s a damn shame.

I really wanted to like this movie.  The first one is not a perfect movie, but it came at a time in my youth that it captured my imagination and helped send me to better things.  And even now it’s a decently made blockbuster that has a personality and a heart to it.  But this movie is glossy and shallow and empty flash.  There’s no arcs to anything in the movie, just characters doing things to help set off the next explosion.  It takes some interesting sci fi concepts and mishandles them in an attempt to rush through a story to set up another one.  Whereas the first movie had an impact in it’s time and still stands out as a 90s mainstay, this one will most likely be forgotten to the winds of time.  And it should, because it’s a massively disappointing movie. 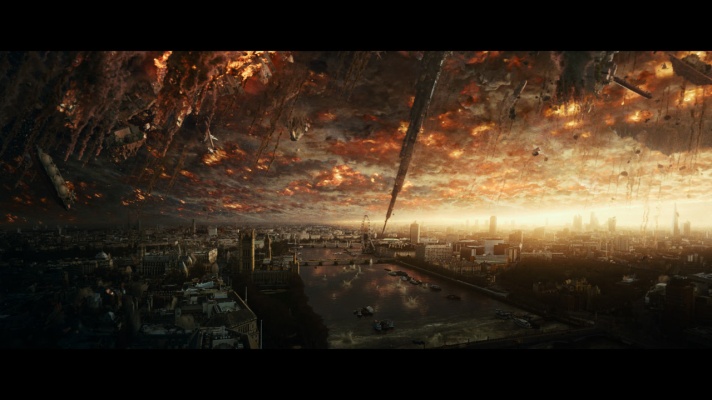 One thought on “Independence Day: Resurgence”