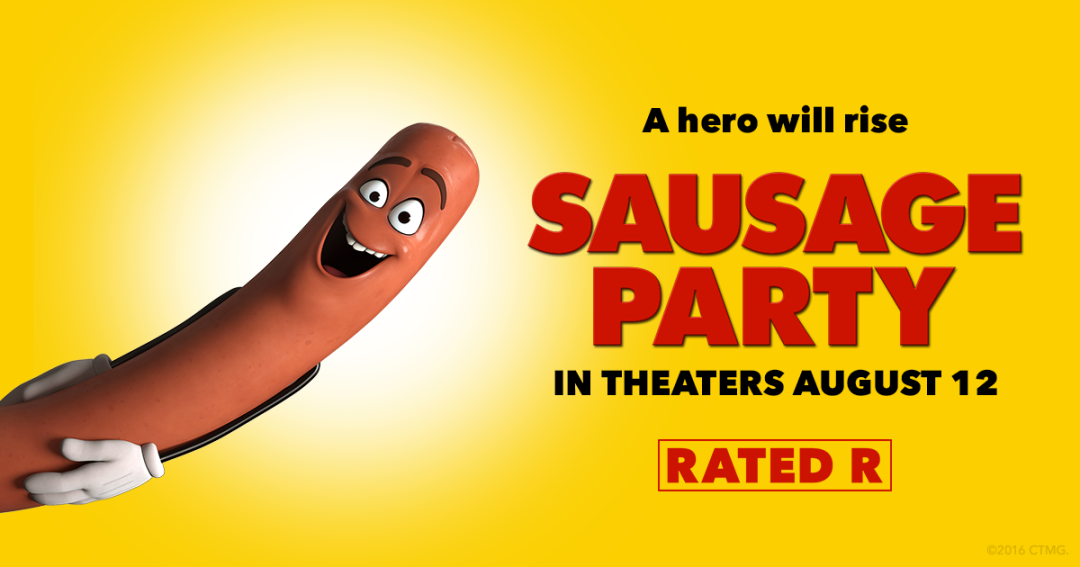 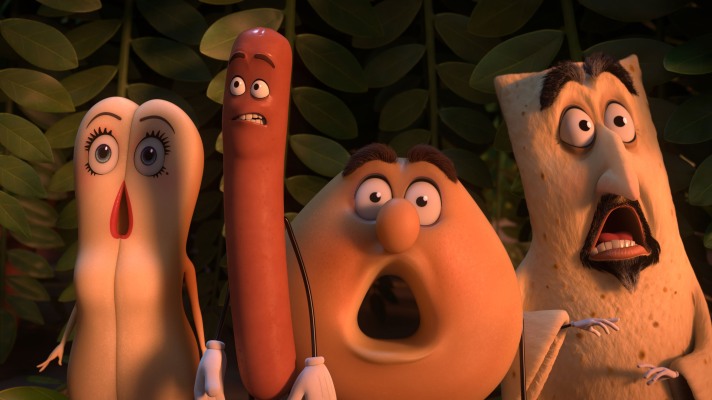 When Freaks and Geeks came out, people would have been stunned to find out that this group would go on to fundamentally alter comedy.  A force to be reckoned with, the Apatow group has dominated comedy.  Even Paul Feig has come to stake out his own claim to comedy, even if it took a little longer, with his female centric brand of comedy.  This alone would have been surprising. But if we were told that Seth Rogen would go on to be the best creative talent in the entire group of actors on the show, that would have been absurd.  He wasn’t too fundamental to the show, getting a decent amount of focus but basically a supporting guy.  Even in Undeclared, he got more to do but didn’t exactly scream comedy heavyweight.  So now that we are here in 2016 and a Seth Rogen comedy pretty much guarantees at least a solid night at the movie, his ascent to comedy master status has been solidified.  Especially after a brief slump with The Green Hornet, he roared back to life doing exactly what he wants.  And now that he’s become his own boss in many ways, it seems like what he wants to do is tackle theology.  So the biggest surprise is not that he’s become one of the most intellectual comedians tackling religion at this point (it’s still surprising), but that his newest on the subject is a Pixar esque comedy.  But being Rogen, it is anything but safe for the Pixar crowd.

Sausage Party is right out of the gate a hilariously filthy movie.  It doesn’t hold its cards close to its chest with the adult sensibility it has.  No, from the opening song that is filled with foul language and sexual innuendos/puns, this just lights a fire to the pagan monument that is holding Pixar inside of it. We follow the hot dog Frank (Rogen) inside of his packaging with other hot dogs, including Carl (Hill) and the malformed Barry (Cera), as he awaits the fateful moment the gods (customers) take them to the promised land.  For Frank, it is the moment he’s waiting for cause it will allow him to finally mate with his girlfriend,  hot dog bun Brenda (Wiig).  But when a container of Honey Mustard (McBride) is returned to the store, he is suicidal and has some scary but vague messages about the promised land.  Frank and Brenda managed to get lost in the store while their containers are brought to the promised land.  They are left behind with Lavash (David Krumholtz) and a bagel (Edward Norton) and have to make their way back to their aisles.  But Franks interest is piqued and he wants to find out the truth of the gods, looking for the bottle of firewater (Bill Hader) that honey mustard makes reference to.  On the way, a deranged douche (Nick Kroll) is on their trail to kill them all. What follows is a hilarious blasphemous and profane movie, tackling high brow and low brow entertainment in really good manner.

This is a movie that should not be, let alone work as well as it does.  Making an animated movie that features sentient food dealing with their meaningless existence is just bizarre.  And the tackling of organized religion is very blatant too, something that is pretty taboo for something like this. We all assume that when you make an animated movie that it’s for kids.  Sure, we get a Ralph Bakshi and the like now and then, but cartoons are aimed squarely at kids.  So to get one that is not only unbelievably vulgar, but that so blatantly tackles such a controversial subject is insanely ballsy.  That it does it without breaking a sweat and making some really strong points makes it all the more impressive.

Watching this movie, I got a sense of some Lovecraft influence in it.  The idea that there are gods but they don’t care about our existence is so Lovecraft, but hilariously applied to food.  It adds a specific flavor to the themes.  It’s not the catholic flavored brand of religious satire that Rogen delivered in This is The End or Preacher.  Going Lovecraft adds a wider range of religions, since many of the foods act like stereotypes of the regions they come from.  Which is great, because it’s gonna drive some hyper sensitive folks real crazy.  The thinkpieces are gonna fly freely after this one, as it doesn’t make any safe moves.  It’s not being mean or anything, but it’s very intentionally playing into the stereotypes to make it’s point a little more palatable. Putting behaviors onto foods that may not necessarily be true but recognizable to us gets the societal message across.  So with this, we can see that Judaism and Islam and Hinduism and Christianity and all of it is being aimed at.  But it’s not mean about it, never going the Gervais kinda route of calling believers stupid.  It has Frank kinda go that route but he learns a better way to make his point and be more respectful to others.  Although in this world they learn quite definitively that the gods are bullshit, so there comes a point where coexistence of other beliefs isn’t a problem.  All these fucking foods come to the realization that they’re fucked and it leads to one of the most insane fucking endings to a movie I’ve ever seen.  From the food revolting against the customers of the supermarket they’re in to the already infamous food orgy that follows the uprising, the entire ending to this movie is brilliant.  It kicks the movie up a notch to legendary status.  Not that the movie is bad beforehand, cause it isn’t.  It’s fun and got some real energy and smarts to it.  But this ending is just a shot of full blown ingenuity that the first 2/3rds doesn’t have, cause it has to be a little more traditional through the beginning to set the stakes up and such.

It’s almost pointless to bring this up, but the cast is great.  It’s filled with the Apatow crew in all the roles, and they all slay.  Even the sort of Apatow crew cousins are here, like McBride and Wiig.  McBride might be my favorite, if only because the suicidal honey mustard is too funny for me.  Rogen is great as usual, and Wiig gives a better performance here than in her other big summer comedy this year.  The running subplot of the Lavash and bagel having to begrudgingly deal with each other is so hilarious, putting the Israeli/Palestinian conflict onto food just tickles me so much.  Especially since Norton is just doing a Woody Allen impression, and a damn good one at that.  Hader does three voices here and they are all hilarious, as Hader is want to do.  I particularly like his drunken Tequila bottle. Although he is pretty good as the Native American bottle of firewater.  Just as a big ole barrel of offense, having a box of grits played by Craig Robinson is just perfectly insensitive.  Cera is better than he’s been in a while, actually not being as irritatingly shy like he does alot.  And Nick Kroll is fucking great as the douche, bringing all the shitheel gym rat bravado to the role.  The cast is great and helps to bring these sentient foods to life.

The animation isn’t up to the same levels as Pixar, but that’s really not a problem and not a surprise.  They didn’t have 9 figures to make this movie, but I also think it’s good this doesn’t have the hyper realism that Pixar does.  Because this movie is so big and wild and trippy, that making it more realistic would kinda throw the movie off kilter.  It allows them to make their big points and their insensitive jokes with impunity, allowing the food to be as expressive as they need without worrying about being true to the foods form.  So while it won’t win any awards for technical excellence, it works in their favor.  All the moments shine, from the hilarious Saving Private Ryan homage all the way down to the food orgy, you never feel cheated.

After a dip in quality with The Interview, Seth Rogen has really bounced back in a big way.  The Night Before was real solid, getting better with each viewing.  Neighbors 2 is amazing and set a real high standard for comedies this year.  And now with this, he’s made another legit contender for best comedy of the year.  It’s basically a tie between Rogen movies, and that’s good.  They’re quite different too.  I don’t really know which I prefer.  Right now I’d say it’s Neighbors 2, but this could sneak away with it over time.  Each one has something to say.  While I may not necessarily agree with the nihilistic outlook this movie has, but I liked how it portrayed it.  It went about it in a smart way.  For a smart, vulgar, stupid, blasphemous time at the movies, there’s nothing like this. 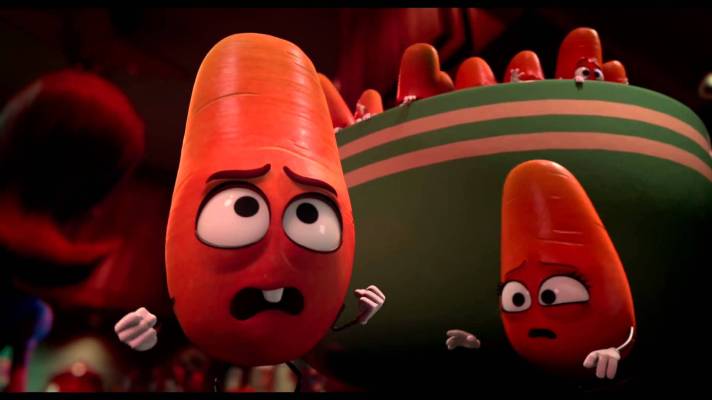