Todd Phillips doesn’t have the best critical reputation in the business. For a man who has made a lot of money for the studios, his movies tend to fall on the disliked side of the equation.  It’s honestly feels like he is the Michael Bay of the comedy world.  Makes very bro heavy movies that are eaten up by the brodudes and shat upon from the intellectuals on high.  But there’s also the sense, like Bay, that Phillips doesn’t actually like the bros his movies tend to connect to.  His movies have a meanness and cynicism to them that you don’t really see in other movies of the same ilk.  The movies themselves may not call the characters out for being pieces of shit, but the sense is there that he don’t like them or their world. But the consensus remains constant.  He is a hack who makes cheapo bro movies for a quick buck.

I don’t agree with the sentiment that he’s a lazy director.  He’s no master craftsman, but is he no way a hack.  His movies don’t really feel lazily made to me.  The scripts of the Hangover sequels may be a bit lazy, but the actual nitty gritty of the shooting is anything but.  Very few comedy directors make the efforts to have a shot looks as good as he does.  Not even Academy Award Nominated Director Adam McKay does that.  And he isn’t afraid to go dark with his movies, letting the consequences come out.  So it isn’t too much of a surprise to see him go after something that is, despite the marketing, much more dramatic than normal from him.  It’s a natural progression.  A focus on bros doing dirty deeds and having to suffer the consequences of them.  In many ways, this is his attempt at Pain & Gain.  Albeit one that isn’t as rich or entertaining as that minor masterpiece of greed and machismo.

Based on a true story that inspired a great Rolling Stone article, our story places us into the world of two young 20 somethings as they enter the world of gun running.  Miles Teller is lost, having no idea what to do with his life or how to do it.  Enter his old school friend Jonah Hill, and opportunity arises.  Hill has been in the gun business in California, but a dispute between him and his uncle causes him to move to Florida and start his own business.  Teaming up with Miles, these two start making some good money and going deeper and deeper into the moral dubious world of gun dealings.  And when the biggest contract they’ve ever been apart of is up for grabs, they delve into some questionable tactics to do so.  We get a journey into the darkness of capitalism and how War is really just a profit business.

This movie can pretty much be described as Lord of War Jr.  The ins and outs of the gun running business and how there’s a real scumminess to those that do such shitty work.  This movie doesn’t hand wave away how shitty this work is. Teller kinda gets the more decent treatment, but they also lay bare how complacent he is in the work.  Once he sees dollar signs, his willing to lie and steal and cheat to make that cheddar. He’ll claim it’s for his family, but that doesn’t excuse his deeds.  The movie is told from his POV and he gets the arc, so he ends up more decent and clean than Hill.  But the movie ends on a note that doesn’t really let him off the hook. Although it really could have done more work to show how shitty and amoral this work is.  Which is why it comes off more like the B version of Pain & Gain or Lord of War.  The events are bad, yeah.  But it doesn’t really get into the real nastiness that comes with this or dive into some real darkness the way those two movies do.  Hell, the movie isn’t as dark or violent as The Hangover sequels.  It really wants to be those kinds of slick and enlightening movies that dive into the heart of darkness, but it just skims the surface.  Which is a shame, because the story is pretty entertaining.  It’s just missing that deviant spark.

While the movie doesn’t really go very dark, it doesn’t pull punches with Jonah Hills role.  This character is a real, honest to God piece of absolute dog shit. He is a fast talking, dishonest con man who will take anyone down if it makes him a quick buck.  And to the movies credit, it lays the foundation of his seediness quite well that his inevitable betrayal of Teller is more than believable.  And Hill plays this role like he’s gonna die if he doesn’t give it his all.  This is honestly the best performance he’s ever given.  It’s focused and deplorable and charismatic and really layered.  Seeing him have to put on personas to play people and snap back between them is a fucking sight to behold.  This isn’t the kind of movie that would normally get Oscar love, but WB would be really fucking stupid if they don’t make a push for him to be nominated for Best Supporting Actor.

This is no amazing piece of work, but it is an entertaining enough diversion.  In a summer of mediocrity, this feels more like a breathe of fresh air than it normally would.  It’s a fun little movie with a fantastic performance from Hill.  Phillips continues to do good work behind the camera, making the movie more cinematic and well made than a movie like it normally would be.  It doesn’t go too deep into the darkness but hints at it.  The music may be a little too obvious and easy, but it’s a fun and breezy movie that should send people down the path to check out Pain & Gain and Lord of War.  I’m interested to see where Phillips goes after this, if he goes even more into serious territory.  Cause his dark and cynical view of the world seems to be getting darker and darker.  At the very least it’ll be well made. 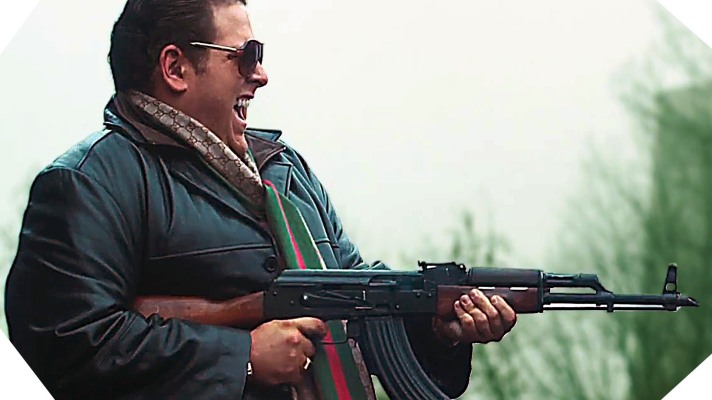