With his massive and populist success with Guardians of The Galaxy, it’s easy to forget that James Gunn made his bones with hard R genre pictures. From his days at Troma to his work on Slither and Super, Gunn is a certified genre superstar. He’s shown his smarts and idiosyncratic ways since the beginning. So while he is further enmeshed in the big old universe that he has with a Guardians sequel, he banged out another horror script and enlisted Wolf Creek director Greg McClean to bring his work to life. The idea he wanted to tackle was the idea of corporate dehumanization with a dash of corporate colonialism, all wrapped up in the guise of a bloody Battle Royale type scenario.

Belko is an American company located down in Colombia. Their purpose is to help other companies in Colombia to hire Americans for work. There’s not a procedural element to the movie where this all comes into play, it’s just something we hear in the beginning to highlight the company and add to the thematics that Gunn and McClean are going for. After the brief intros to the assembly of employees at this place, we are thrown into the plot. A mysterious entity has closed down the building, making it into an 8 story prison. Their goal is to pit the employees against each other to the death, with certain rules that must be met. If 30 people aren’t killed in 2 hours, 60 people will die. So on and such. The employees try to figure out what’s going on, why, and try to survive. Throughout factions are made and loyalties are put to the test, and ultimately climaxes in a bloody mess that puts everyone still standing through the ringer.

The first thing that comes to mind with this movie is how unbelievably mean it is. People are killed without any hesitation and are killed with such brutality that it’s shocking. Almost willy nilly are people picked off, with some of the bigger names saved for later into the movie. And even they aren’t spared the brutality that is this movies bread and butter. It’s not just that people are knocked off with no care, but that the kills are done so brutally and graphically. It’s an ugly sight to behold. Yet weirdly it’s kinda funny. The level of mean is so high that it feels satirical. Some of the kills are shot with a comedic lens, with some of the violence being punchlines. The movie never has a wink or a nudge with the music, no Benny Hill type call out to the audience to laugh. The level of violence plays with a point, working within the dehumanization of corporate culture. How it pits people against each other. How you can work with people day in and day out, act like friends, but when push comes to shove you will execute them to move up and survive. The corporate culture is brutal in an existential way in our world, so why not make it brutal in a physical way in this world?

The movie is dealing with corporate culture, but it’s also dealing with something else regarding the corporations. It’s the bit of colonialism that they bring along to these other countries. Being an American corporation in Colombia brings about some danger, but this corporation over does it. Heightened militaristic security and their own little compound. Tracers in the back of their necks to prevent kidnappings (which secretly double as bombs). Their whole business, as stated earlier, is to make it easier to bring more Americans into the country, forcing the country to change to their ways. So there’s two ways to watch this movie. You can see it as the corporate culture pitting people against one another and you can watch it as those put out by the gentrification of the business fighting back. Or you can watch it as both, as the nature of the business is mixed up within the Government. 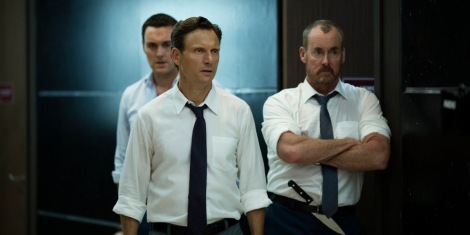 The movie is far from perfect, although it is a highly enjoyable in it’s own deranged way. It’s biggest flaw is the character writing. There’s no real depth to many of these people, only being watchable due to the fantastic casting of B movie vets and James Gunn stalwarts. John Gallagher Jr. makes his role of the only one smart enough to realize how this is all gonna end work, even though it could have been a really annoying part in lesser hands. Tony Goldwyn is his usual great self, playing the personification of corporate higher ups. Coming off like a good guy who is looking for the way to help everyone, but is really just out to protect himself. Although there is some beats in this where we see he isn’t some monster, that there is some humanity in him that weeps for the situation he is thrust into. John C. McKinley reminds us that before he was a great comedic performer he was a go to character actor to portray heavies. He’s the office weirdo that doesn’t understand the word no. The rest all do good work too, with maybe the exception of Sean Gunn. He sticks out like a sore thumb, the only character in it that is played for laughs and it’s off putting to say the least. The low key humor of the rest of the movie works because it never shouts at you to be laughing. He is just a big ole “APPLAUD” sign. But while most of the cast does good work, there’s nothing more to them than the roles they fill within the office hierarchy. Which is a shame, because some stronger character writing could have made the mad cap violence hit a lot harder than it already does. But then again, that could also be argued to be the point. That in this office world, people are just the roles they fill and are homogenized beings. Even still, that point could have been done better. The only other element that didn’t really work is the final moments of the movie. Without spoiling, they feel out of place and play life the typical horror ending that is just a denouement to set up more movies. But it doesn’t spoil it enough to really wreck the prior 84 minutes.

There will always be the question that lingers with this movie regarding James Gunn. What would the movie be if he handled directing? Honestly, it probably wouldn’t have looked much different. He was on set a good deal, helping McClean out with any questions regarding tone or content. He signed off on it. Any hand wringing stems from the fact that Gunn’s projects tend to have a more humorous bent to them, even if they take turns into the serious. This has almost none of that. Stone cold serious, where the humor is buried deep within feet of blood and guts. McClean does a really good job here, bringing the story to life and really nailing the brutality. If the violence doesn’t land as hard as it does, the movie would be pointless. It would basically be a pale imitator of past movies. But with his strong eye for visuals and penchant for making violence hurt, McClean makes the movie it’s own beast. 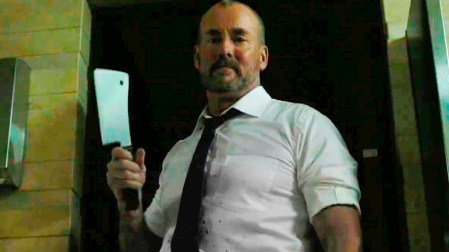 Is this movie gonna be for everyone? Absolutely not. A movie this mean will not play for most audiences. Even some of the regular movie goers that claim to like horror movies might be put off by it. For anyone who remembers the complaints that The Hateful Eight was too mean spirited, expect a fresh round of that bullshit when this movie is seen by more. But if you can open yourself up to such a cold blooded experience, a righteously angry and bloody movie, you might just have a rollicking good time. Because while it’s been a great year already for movies, mainstream movie theaters have not had the best of times with horror movies (Get Out excluded). And while this won’t ever be confused with a genre classic, it’s a good little movie that plays very well in today’s world of corporate malfeasance.